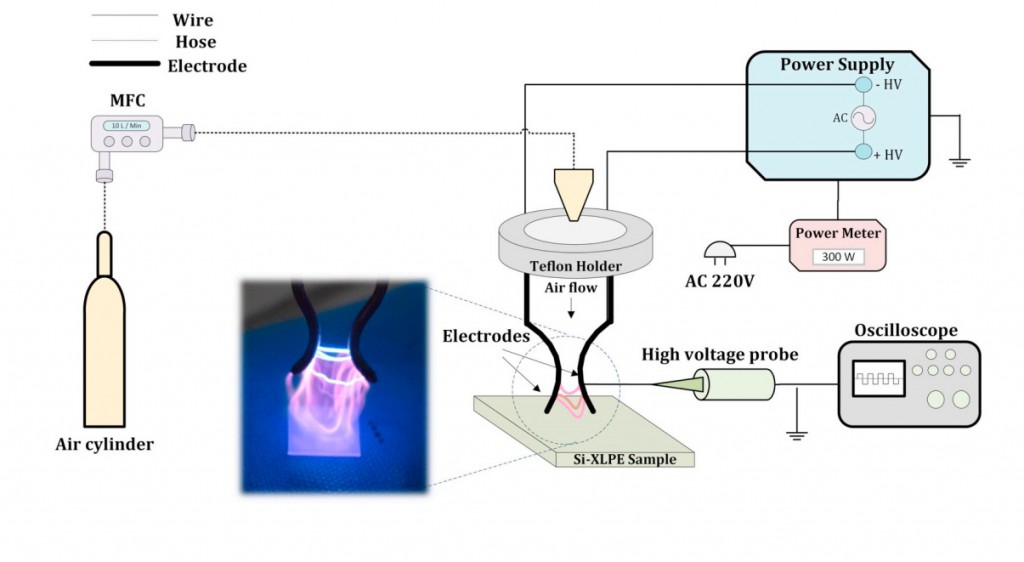 In this study, surface modifcation of a silane-crosslinked polyethylene (Si-XLPE) compound was carried out by gliding arc atmospheric plasma. Samples were exposed to the plasma for diﬀerent durations and the plasma induced alterations of the surfaces were comprehensively assessed. Surface chemistry was evaluated initially via Fourier transform infrared spectroscopy (ATR-FTIR) and energy-dispersive X-ray (EDX) analysis. Surface morphology was investigated by atomic force microscopy (AFM) and feld emission scanning electron microscopy (FESEM). For calculating surface free energy (SFE), contact angle measurement (CAM) was performed. In order to have accurate details on the surface chemistry and morphology, X-ray photoelectron spectroscopy (XPS) and Grazing Incidence X-ray Diﬀraction (GIXRD) analysis were conducted, respectively. Results revealed that this modifcation method doubled the amount of atomic oxygen and nitrogen on the surface, indicating the formation of polar chemical components on the surface. Moreover, plasma could change the surface morphology
considerably by selective etching and impacting on roughness. Furthermore, it was observed that the modifcation improved the surface crystallinity to some extent and also increased SFE drastically. Surface modifcation of Si-XLPE by gliding arc plasma has then proved to be an eﬀective technique during which noticeable improvement in wettability has occurred. 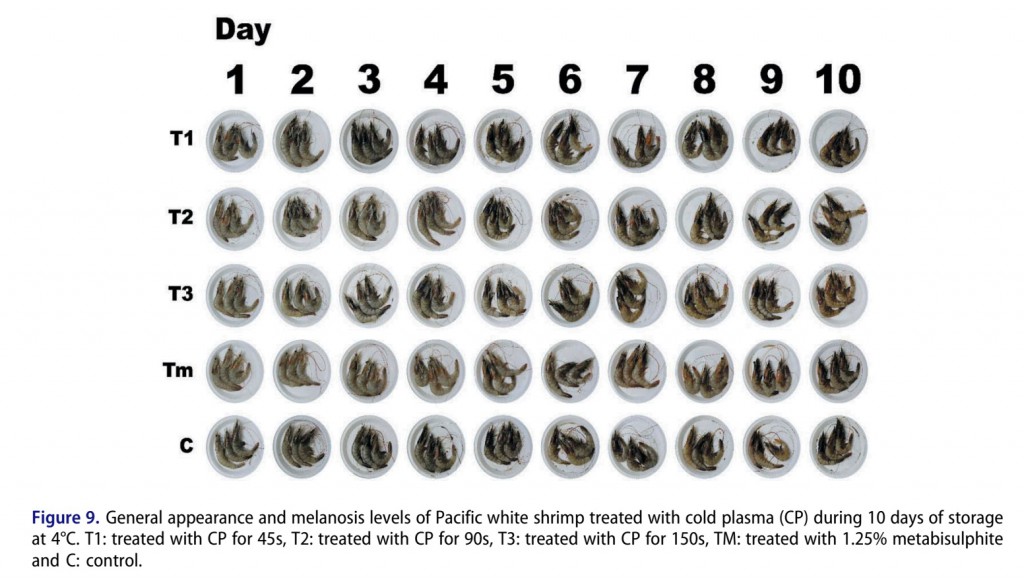 ABSTRACT
Pacific white shrimp (Litopenaeus vannamei) is an important species in aquaculture worldwide. Post-mortem changes during cold storage reduce the quality of shrimp and shorten its shelf life. Cold plasma (CP) was applied for 45, 90, and 150s as T1, T2, and T3, respectively, to fresh harvested shrimp. The biochemical parameters and melanosis were analyzed in comparison to metabisulphite treated (TM) and control during 12 days of refrigerated storage. The results highlighted lower rate of increase in pH, total volatile base nitrogen (TVB-N) content, thiobarbituric acid reactive substances (TBARS), free fatty acid (FFA), peroxide value (PV), and fluorescent compounds (FC) in shrimp exposed to CP and metabisulphite compared to control (P < 0.05). Although CP lowered biochemical changes in T1 and T3 shrimp, T2 was the most effective treatment in reducing undesirable changes and improving quality of shrimp. In all storage periods, melanosis was significantly lower in T2, T3, and TM samples. Results demonstrate that CP exposure effectively decreases relative activity of polyphenol oxidase (PPO) enzyme, and prolonging the exposure to CP for 150 s resulted in 50% reduction in enzyme activity. We conclude that application of CP for 90 s was the most efficient circumstance to extend shelf life of white shrimp during cold storage.

Abstract:
Introduction
This study evaluated and compared the antibacterial effect of plasma and photodynamic therapy (PDT) in root canals infected with Enterococcus facials, for the first time.
Methods
One hundred single-rooted extracted human teeth (no treatment) were selected and sterilized. Root canals of teeth were prepared with the crown-down technique and contaminated with Enterococcus facials after sterilization, and incubated for one week. To investigate the effect of disinfection, 60 specimens were randomly selected for three disinfection groups: He and He/O2 plasma (n=20) in 5-second groups (control, 2, 4, 6 and 8 min treatments) and PDT (n=20) in 2-second groups (control and PDT treatment). Next, for comparison, 40 remaining teeth were divided into four groups: control, 8 min He plasma, 8 min He/O2, and PDT. Results of antibacterial action were reported by CFU/mL analysis and the structural changes of biofilm were evaluated by SEM.
Results
All groups showed a significant reduction of bacteria after treatment, and He/O2 plasma was more effective against E.faecalis, followed by PDT and He plasma respectively, further confirmed by SEM.
Conclusion
He/O2 plasma is a strong sterilization method against E.faecalis biofilm and can, therefore, be an effective therapy in endodontics. 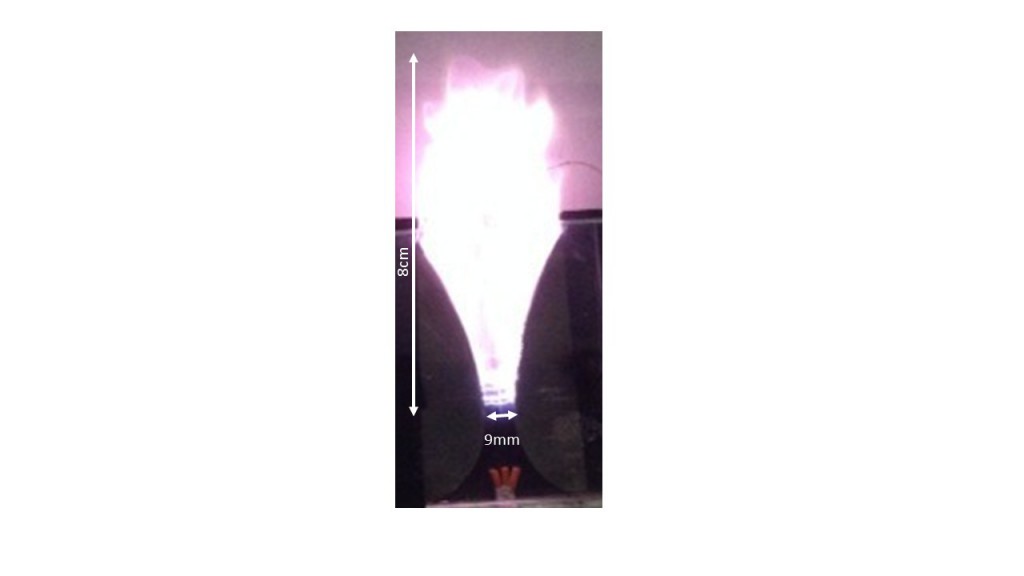 Abstract
High concentration benzene production in paper and painting industries is a restrictive problem in production line of companies. In this study, removal of high concentrated benzene produced in painting companies was investigated using a Plate Gliding Arc (PGA) reactor. Decomposition of methane and carbon dioxide as the most predominate byproducts of benzene decomposition was also studied using (PGA) reactor. The effect of several parameters such as input power, feed gas flow rate, type of carrier gas, and [CH4/CO2] flow ratio was studied by two series of experiments. The results show significant conversion (>70%) of high concentration benzene (74000ppm) without using any catalyst. Selectivity of CO2 and CO was 88% and 10% respectively showing complete oxidation of benzene. The maximum conversion of CH4 and CO2 reached 52% and 69%, respectively by using optimum ratio of 3:4. The main results of this study proved removal of high concentration benzene using a low-energydensity reactor. Furthermore, an optimum value for efficient conversion of methane and carbon dioxide was achieved and the energy density of the PGA reactor was evaluated, which shows a good promise for industrial applications. 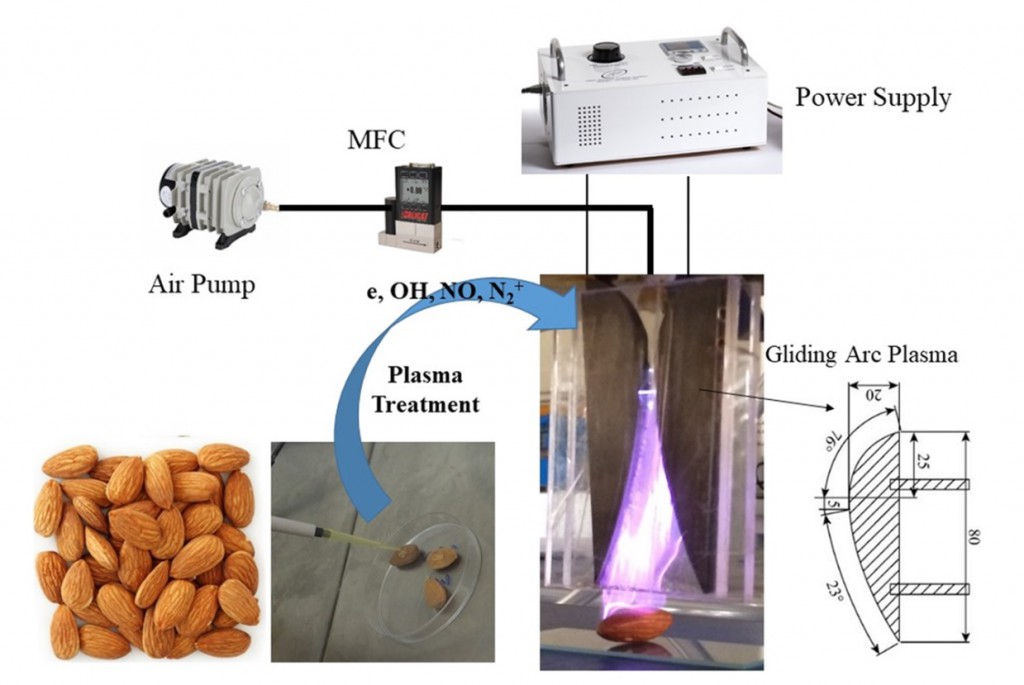 Abstract: Escherichia coli is responsible for more than 90% of food poisoning cases and can survive for long periods under adverse conditions and refrigeration temperature. In this study, the effect of gliding arc plasma processing on infected Almond with Escherichia coli was investigated. The optimal conditions during the different applied powers and treatment time were determined. Moreover, the optimum condition was examined on other gram-negative bacteria as Salmonella and Shigella. The viability of almond bacteria was studied using colony-counting analysis and evaluation of active species in plasma was made by the optical emission spectroscopy (OES) method. Scanning electron microscopy (SEM) analysis was carried out to illustrate the morphological change and color measuring analysis was performed to investigate food quality after
almond plasma treatment. Finally, it was shown that plasma technique has the capability of food industrialization and potential of method extension. 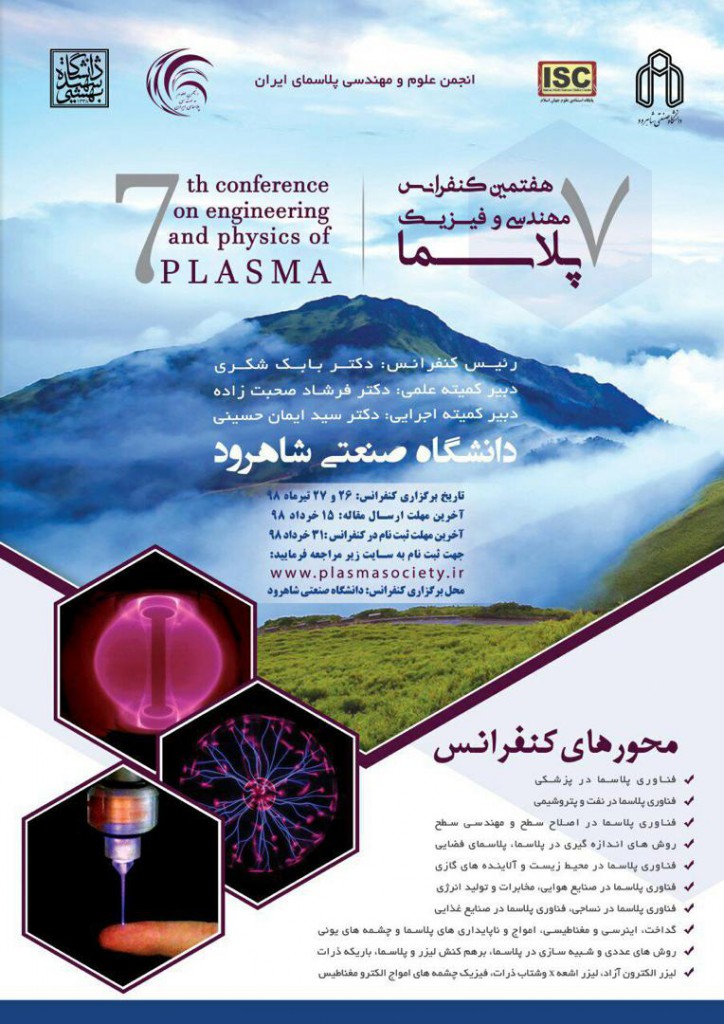 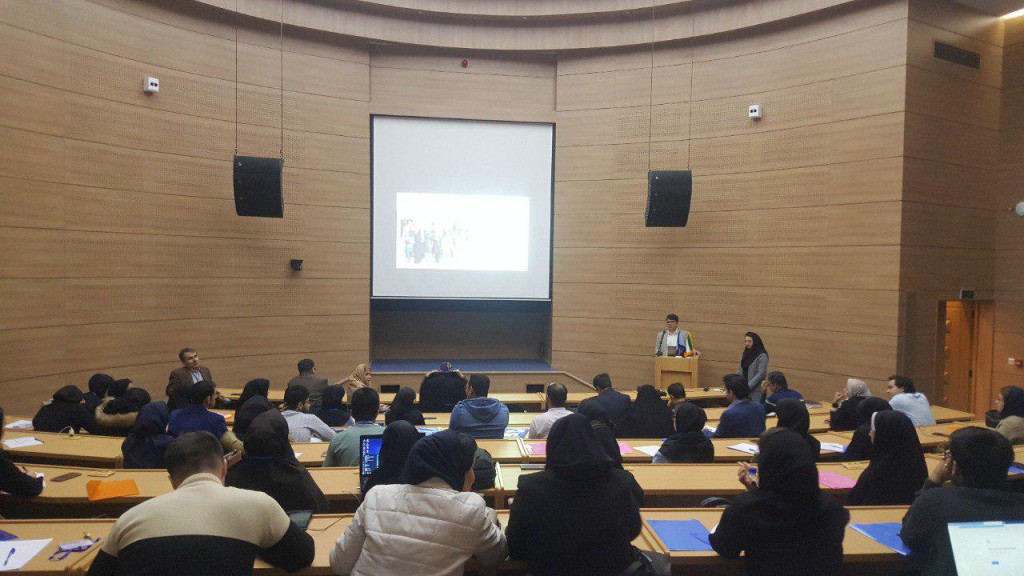 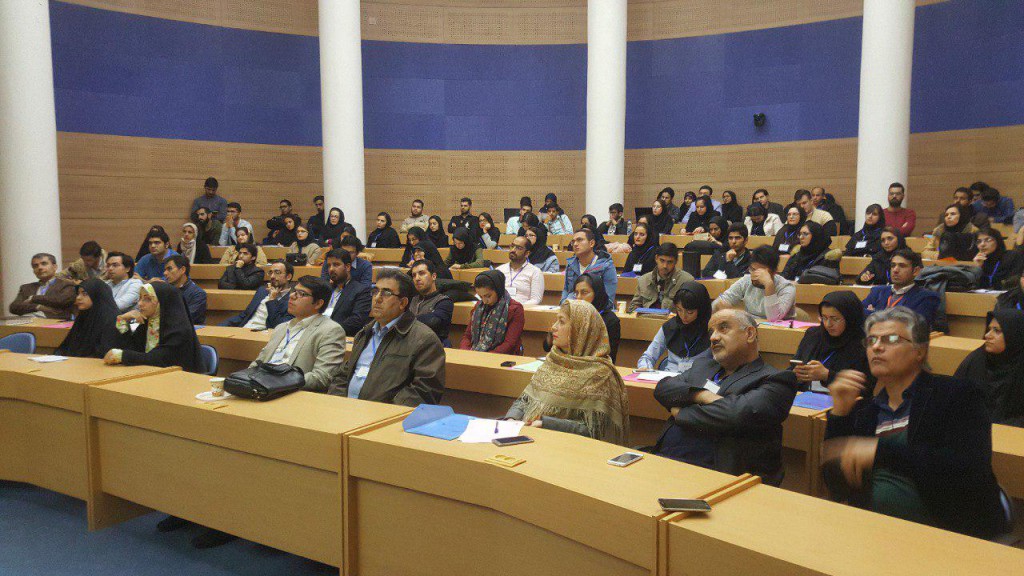 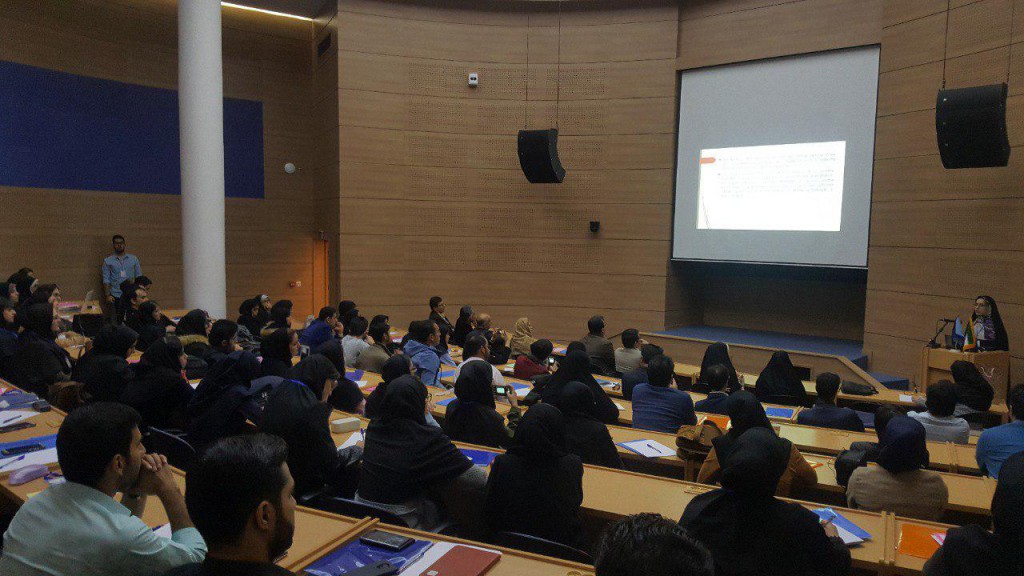 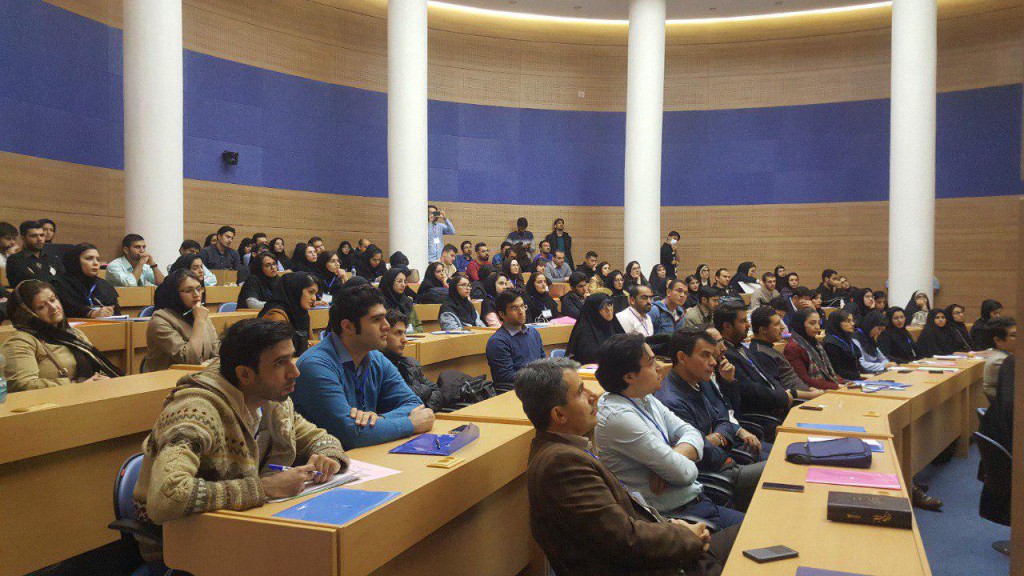 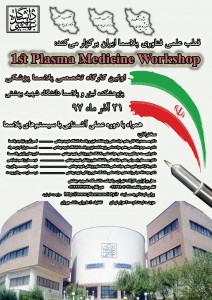 Today, considering the large-scale manufacturing of chemicals, the environment is facing the problem of air pollution more than ever. Problems such as global warming which have appeared due to emission of greenhouse gases and volatile organic compounds from factories and industries, have had deadly impacts on the body of the environment. In addition, the direct impact of these gases on humans has been observed through diseases such as asthma, bronchitis, dyspnea, cancer, heart attacks and different sorts of allergies which devour thousands of lives annually. In order to prevent these pollutants from emitting, various methods with specific upsides and downsides have been used.

In this study, the use of dielectric barrier discharge plasma technology in destructing the pollutants Benzene, Toluene and Xylene has been investigated. Throughout the experiments, factors like destruction rate of the reactor, effect of the applied voltage, different types and amounts of the byproducts and also, the temperature of the reactor were investigated. In this experiment, vapors of the mentioned pollutants entered the air plasma region inside the reactor by the help help of the carrier gas and were destructed. In order to measure the above factors, a thermometer, gas sensors, OES and GC analysis were used.

The results show that by increasing the applied voltage and the passing of time, temperature rises up to a certain point and correspondingly, destruction rates increase; in addition, high-energy electrons and other active species cause the high destruction of the pollutant molecules. The highest destruction rates recorded for Benzene, Toluene and Xylene were 82.31%, 80.88% and 69.68%, respectively. The major byproducts were CO and H2 and also, other hydrocarbons were produced in small amounts. 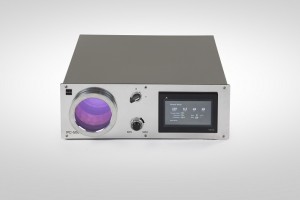 Abstract
In this study, starch film and starch/chitosan composite film were modified by a low pressure air and O2 plasma at different durations. The effects of plasma on the topography, wettability, chemical surface composition, mechanical properties, optical properties, oxygen permeability and water vapor permeability of the films
were examined. The mechanical properties of the both films were significantly improved. It is shown that air plasma is more efficient in improving tensile strength of the films due to more crosslinking at the air plasma treated film surface. No significant change in the starch film ҆s elongation at break was observed although
starch/chitosan composite film ҆s elongation at break was increased due to polymer degradation. After plasma treatment the roughness of the treated film surface increased due to etching effects of plasma. A significant increase in the hydrophilicity of the films was observed due to formation of oxygen-containing groups after plasma treatment. FTIR analysis illustrated a decrease in C-H groups
that caused an increase in C-O and COC groups in air treated films and carbonyl groups in O2 –treated films. Although an increase was found in hydrophilic groups on the film surface after plasma treatment, no significant change was observed in WVP of films, however oxygen permeability of the films were decreased.